1. Please find the answer by yourself.

2. Please find the answer by yourself.

3. Once, long ago, a beautiful lady was walking through

a forest and came upon a large dragon. She screamed

and ran to the nearest village, where she found a wizard,

a boy of twelve by the name of Harry Potter.

a. Smith suggests Jones to do the work another day first,

and then tells him it's time to go.

b. The direct speech act is reminding; however,

the indirect speech act is a request.

That is, in fact, Smith wants Jones to leave immediately.

The use of indirectness in b is a better way to avoid quarrel.

In a and c, Smith uses direct speech to request Jones to go,

which is likely to threaten Jones' negative face,

and cause quarrel easily.

to refer to the articulation using the tongue touching

It is a kind of assimilation that an affected sound becomes

when it occurs before the high front vowel.

refer to the appearance of the insertion,

such as glottal stop insertion.

when it is between a nasal and a stop; moreover,

the place of the stop is determined

by the preceding nasal's place.

to refer to a situation

that one sound affect its neighboring sound,

For example, /T/→[t]/ when it is before another fricative,

im- occurs when the first sound of the stem is [+bilabial];

il- occurs when the first sound of the stem is [+lateral];

ir- occurs when the first sound of the stem is [+rhotics];

iN- occurs when the first sound of the stem is [+velar];

a. referent: It denotes someone or something

that an expression refers to.

b. prescriptive grammar: It corrects the speaker,

and tells us how we should use the grammar of language.

c. clitic: It can't stand alone, and has to attach to a word.

The difference between clitic

and affix is the former has looser attachment to the stem.

d. competence: What a native speaker knows his language,

morphology, semantics, and so on.

e. derived morphology: It is one kind of word formation.

and so on, which will change part of speech

and meaning of the word.

f. infix: It is a kind of word formation,

and infix is not occur in English.

Infix is used as affixes added within a stem.

than the grammatical function, including nouns,

h. anaphora: Anaphora is a given knowledge,

and it has the antecedent occurred

before to refer to the same referent.

a. homophony: For example, bare and bear.

The two words have the same sounds phonetically.

b. a sentence that is lexically ambiguous:

For example, the ball is very interesting.

The "ball" is lexically ambiguous,

and can be explained as a round object, or a party.

For example, I realized I was overweight.

No matter how I confirm or deny the statement, it is a fact that I was overweight then.

The patient of Broca's aphasia has halting speech,

Moreover, the words usually display the lack of inflections.

On the other hand,

the patient of Wernicke's aphasia has very influent speech,

but the meaning is nonsense.

Broca's aphasia is about productive disorder

while Wernicke's aphasia is about receptive disorder.

11. The student prepared for the test very diligently.

because we have displacement.

That is, we can talk about things here and now

or things happened before.

Moreover, we have productivity and creativity

in language to make novel sentences we have not heard before.

Third, we have cultural transmission by language and writing.

13. Please find the answer by yourself.

14. The teacher knows who the student talked to. 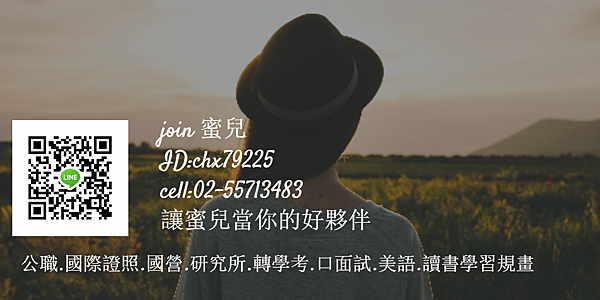 Posted by 最新快訊轉學考研究所考取課業輔導考情分析-插大.私醫 on 2015年4月30日